Caffe Ladro and the Community of Coffee

A few weeks ago, I sat down with Jack Kelly of Caffe Ladro to hear and hopefully share his story. I was a little bit embarrassed because even though I've lived in Seattle for a number of years, I knew very little about Caffe Ladro. In my defense, Seattle has a ridiculous number of amazing coffee choices. But, Caffe Ladro has been around here for a great many years, now having 14 (soon to be 15) cafes, along with their own roasting operation.

I was thinking I would be getting a story of a Seattle company that does a lot of great work to bring their customers a fantastic experience.

I realized as we were talking, that the story was more than that, and much deeper.

Jack's experience through Caffe Ladro, through the communities in Seattle, and those communities whom they now work with around the world, paints a picture of the immense connective social and personal power that coffee has.

Here is an excerpt from our interview, in the issue. Jack explains his changing experience with coffee and Caffe Ladro through the years…

I’ve always been a barista – I started as a barista the first couple cafes I had, that’s what I did. I was the showman of the morning. I held court every day, and people would come in. It was all centered around the product of coffee, but really it was about the experience. We liken it to the pub – it’s the morning pub scene. That’s what the coffee business was for me at the time – it was about those relationships, and the relationships of the baristas and myself and the neighborhood.

We saw what happens with a really well run cafe and a dynamic neighborhood. It’s really transformative. It becomes the centerpiece of the neighborhood. Everybody meets there, everybody knows everyone’s name, its a center of community. That was what Ladro was about. It was about being involved in that community and sharing that with each other.

As I became fascinated with roasting, and ultimately sourcing, that community has just gotten bigger. Now, we bring farmers to Ladro. We have cuppings where we have farmers and families that we work with in El Salvador or Costa Rica, they get to come see us here. We get to tell those stories, and share pictures. Its really expanding the understanding that community is bigger than our neighborhoods.

So I think the Ladro evolution is absolutely appropriate – the community that we had as a cafe is now just a bigger community including the farmers and these other countries, it’s quite cool.

You can read, and listen to the interview in its entirety in this month's issue of Coffee Lovers Magazine. New subscribers can grab this issue free through the 7 day free trial in the app. 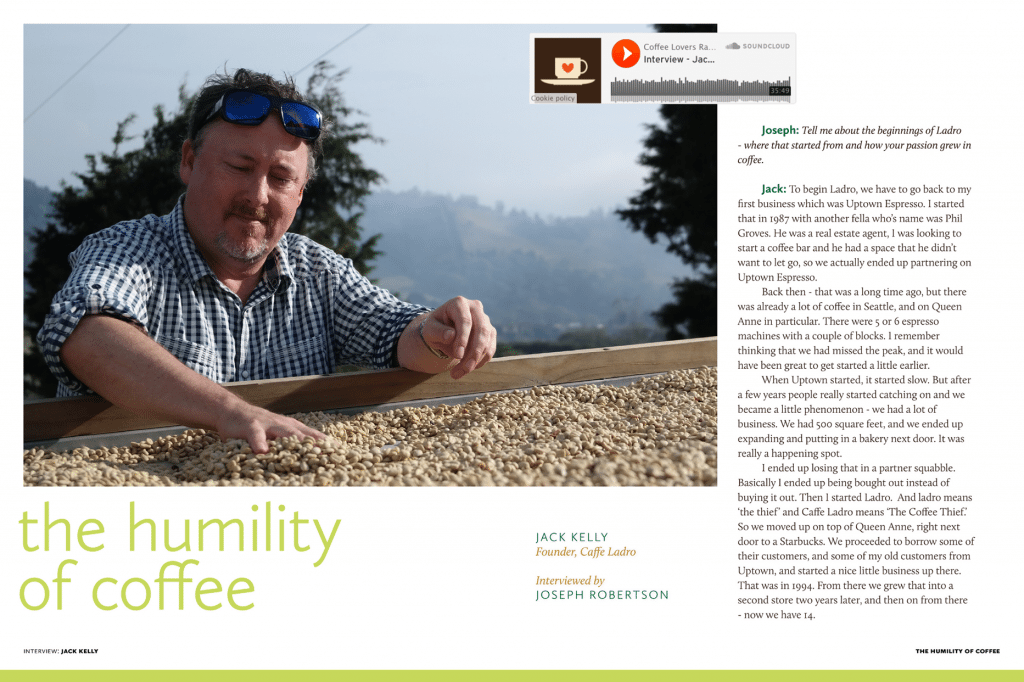